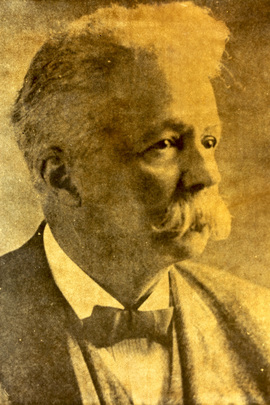 Clinton Hart Merriam
1855-1942
American Naturalist and Ethnographer
Clinton Hart Merriam was born to Caroline Hart and Clinton L. Merriam, both from prestigious families. Clinton L. Merriam had an entrepreneurial spirit, moving to New York City where he succeeded in business, retiring early to return to the family farm, and serving two terms in the House of Representatives. Caroline Hart was the daughter of a judge and a graduate from Rutgers Institute, one of the nation's earliest colleges for women. They had three children: Charles Collins Merriam, associate of his father and business man of farming and lumber; Clinton Hart Merriam, the hero of our story; and Florence Merriam Bailey, writer and naturalist.

Merriam had a fascination with the outdoors, an interest encouraged by his parents when he was a boy. His father bought him a single-barrel shotgun and had him instructed in the taxidermy of birds from John Wallace in New York City. By fifteen years of age, Merriam had begun his private collection of bird specimens.

At the age of 17, Merriam was attached to the Hayden Survey of the Rocky Mountain West, a governmental expedition, as a naturalist by recommendation of his mentor Professor Baird and by influence of his father. He spent the summer collecting birds and eggs in the Yellowstone region, bringing back 313 bird skins and 67 egg-filled nests. Fifty-some pages in the 1873 Sixth Annual Report of the US Geological Survey mark his first contribution to zoological literature. This trip was a formative one for Merriam, giving him a taste for adventure, a love of field-work, and life-long friends in the other young men he traveled with, including botanist John M Coulter, later president of Indiana University and head of the Department of Botany at the University of Chicago; geologist Henry Gannett, later father of government map-making and the quadrangle; and artist W.H. Holmes, who later helped establish professional archaeology in the United States and who argued against a popular belief of hominid evolution in the New World.

Afterwards, he continued his studies in biology and anatomy at Yale University. During this time, he published a work in which he noted the distribution of bird species was determined by the temperature during the breeding season, a revelation that he would later formalize in his development of the "life zone" concept.  Merriam studied in the College of Physicians and Surgeons at Colombia University and graduated with an M.D. in 1879. He started a medical practice in Locust Grove, NY, his familial home-ground, for a few years in which he designed scientific and surgical equipment and wrote a medical treatise that was unfortunately lost on the way to the publisher. During this time, he continued his interest in biology and continued to collect specimens, write papers, and correspond with naturalists.

By 1883, Merriam's medical practice was thriving, but his interest in scientific endeavor was stronger and he left his career in medicine to serve as a surgeon on the S.S. Proteus, where he collected marine mammals from Newfoundland, Labrador, and Greenland. He was also elected secretary of the newly formed American Ornithologists' Union, and he became chairman of the Committee on Bird Migration. In this role, he developed ambitious plans to divide the United States into thirteen districts, each with a reporting superintendent, which was used to collect broad-scale data of bird populations. Merriam had a growing interest in mammalogy during this time period, too, which was a much understudied field compared to ornithology. Merriam employed skilled collector Vernon Bailey, a farm boy from Minnesota, to be his field agent. With Bailey’s skill as a collector, as well as the newly developed "cyclone" mechanical trap, Merriam built up perhaps the greatest American mammal collection of his day, numbering about seven-thousand specimens.

In 1885, Merriam served as a representative for the United States on an international committee for the world-wide establishment of bird observation stations. By 1885, Merriam was touring the natural history museums of Europe and furthering his studies of bird migration. It was during this year that congress established a section for ornithology within the Entomological Division of the Department of Agriculture, to which Merriam was appointed by recommendation of Baird. The section soon gained independence from the entomologists and became the Division of Ornithology and Mammalogy. Later, in 1905, it became the Bureau of Biological Survey. (In 1939, after Merriam had retired, the division moved to the Department of the Interior and merged with the Fish Commission to become the Fish and Wildlife Service.)

As the first head of the Biological Survey, Merriam launched North American Fauna, a series of publications under the Department of Agriculture. In announcing this publication, he outlined a plan to map the geographical distribution of birds and mammals, which would also outline his future career. Within the first four volumes of the publication, Merriam had described seventy-one new species and several new genera, much to the surprise of the scientific community.

In 1886, Merriam married his former secretary Virginia Elizabeth Gosnell, who would be his lifelong companion. They would later have two daughters, Dorothy and Zenaida. Dorothy, the oldest, stayed in Washington, while Zenaida would often travel with her parents in California.

Merriam began launching a number of expeditions as head of the Biological Survey, beginning with a trip with Bailey to Arizona to study the distributions of birds, mammals, reptiles, and plants. His 1890 publication on this trip established Merriam as an authority of biological distribution and as a leader of scientific inquiry into the drivers of distribution. Gathering a circle of other naturalists from his extensive friendships, he sent them on a number of expeditions across the United States, and even into Canada and Mexico. In 1891, President Harrison appointed Merriam to the post of Bering Sea Commissioner to study the fur seal populations on the Pribilof Islands in Alaska.

While Merriam was widely popular and respected by his colleagues, his perfectionism often drove him to take control of projects by himself, sometimes stifling the ambitions of other young naturalists in the organization. Over time, he gradually grew more comfortable with delegating responsibilities to his colleagues. He would still frequently give advice to his younger colleagues, and he spent considerable time reviewing their manuscripts and working closely with them to develop their ideas.

In 1899, Merriam was contacted by E.H. Harriman to organize Harriman’s famous expedition to Alaska. Merriam, a man with little concern for current events and politics, had not heard of Harriman at the time and at first thought the proposition was a hoax. Once convinced of its authenticity, he organized a team and directed the expedition. For this expedition, Merriam signed on the young Edward Curtis as the expedition photographer, whom Merriam had previously met on Mount Rainier when the young photographer guided Merriam's lost hiking party. Merriam edited and published the twelve volume report of the Alaska expedition on the return and in his spare time. Later in his life, as compensation and as an expression of gratitude, the Harriman family set Merriam up with a lifetime endowment to continue his passion of collecting and preserving ethnographic data, Merriam’s chief focus in his later years.

Merriam had grown fond of the West, particularly California, with its varied topography and environments. He built a home for himself in Lagunitas, Marin County and worked out of the San Francisco Academy of Sciences while out West. He would typically spend the winter months in Washington and the summer months in California. He traveled throughout California, often with John Muir, Charles Sheldon, or his family, and he knew the landscape well.

During these travels, he became increasingly interested and invested in documenting the lives of the native peoples he encountered, whom he saw as in great peril of vanishing. Unlike the checklist-driven ethnography of the Kroeber school of anthropology (Cultural Element Distribution lists), Merriam’s approach was to have personal conversations with the people he encountered to record their stories and the language they used. Merriam was a critic of the lumping of ethnic groups and linguistic stocks that he felt glossed over the diversity of the Native America. Merriam also advocated for calling peoples by the names they called themselves. A sign of Merriam's character, he would go back in his writings and replace words he later discovered were incorrect or derogatory, such as replacing "squaw" and "digger" with "woman" and "Muwa." In 1910, Merriam was financially supported by the Smithsonian to conduct ethnographic research, and he turned almost all of his academic attention towards California ethnography.

During this time, Merriam also collected ethnographic basketry from California and the West. More interested in documenting the lives of native peoples than collecting ornamental baskets, Merriam focused on collecting utilitarian baskets more than baskets that were made for sale. He expressed an interest in basketry that represented a particular kind of material culture that he recognized may not be around very long. He would often purchase baskets he saw being used by the people he met during his travels. The majority of these baskets (close to 3/4) were collected between 1900-1904 from all over California, providing a snapshot of the distribution of basketry technology over a short period of time.

Merriam spent his final years in California and became less active after the passing of his wife in 1937. Based on the deterioration of his handwriting at this time, it is supposed that he may have suffered from Parkinson's disease. He passed away on March 19th, 1942 at the age of eighty-six in a nursing home in Berkeley.

During his life, Merriam was a driving force in scientific circles. He helped found the National Geographic Society in 1888 and was elected to the National Academy of Sciences in 1902. He served as president of the Biological Society of Washington (1891-1892), president of the American Ornithologists’ Union (1900-1903), chairman of the US Board on Geographic Names (1917-1925), first president of the American Society of Mammalogists (1919-1921), president of the Anthropological Society of Washington (1920-1921), and president of the American Society of Naturalists (1924-1925). He left a rich legacy in academics as well as in the many friendships he made. He was personal friends with many leaders in science and government, among them personalities like John Muir, Theodore Roosevelt, and Gifford Pinchot. Merriam cared much for his friends, and when the geologist G.K. Gilbert’s wife passed away, Merriam invited Gilbert to live with his family, which Gilbert did for the last nineteen years of his life. Merriam lived an energetic and passionate life, with love for research, adventure, and the people he met along the way.
For more on the life of Clinton Hart Merriam, see the works from which this information was gathered:
See Also
Copyright © 2015-2017 University of California, Davis Department of Anthropology Museum